Pizzacletta is a wood-fired pizza joint in Flagstaff, AZ. They have lovely thin crust pizza that they cook in a wood-fired oven. You can taste the smoke on in the pizza.
Rating: 8

Often listed as one of the best pizza places in Barcelona, my expectations were high going into this one. After reading that it is run by Michelin star chef Jordi Vilà and award-winning fifth-generation bread-maker Xevi Ramon, they were even higher.

I ordered the “pizza mil dimonis” (Pizza of a thousand demons), and it may have been the best pizza I’ve ever had. It has tomato sauce, mozzarella, a combination of roasted beef, pork, and chicken, spicy chorizo, chilis, pickled onions, and mustard leaves. It doesn’t overload the toppings though, and everything was in just the right proportions. The crust was fairly thin, crusty on the outside and chewy on the inside, and tasty enough to rip off and enjoy by itself.

Tried Great Canadian Pizza in Edmonton. We were impressed, for the price this is quality of the pizza was excellent. This is definitely a place to go back to.
Rating: 7.5

Sometimes there are new places in your hometown that you’ve not yet found time to try… and/or those little-known shoppes that hide in the shadows, that we’re aching to try after driving past them by chance. Today, we made a mission of trying them ALL (note the hyperbole, though six restaurants still seems pretty good!). This pizzcapade started at roughly 11am and concluded just after 5:00 — it was a glorious way to spend a day.

Also, you can click each restaurant’s name to see their menu.

We started strong with what is argued to be the only authentic deep dish pizza in the Edmonton area. This Cheese pizza is not for the faint of heart (read: lactose intolerant), as the amount of cheese and bread was indeed impressive. It was, in fact, more like a pan-fried pizza (with loads of cheese) than a real Chicago style pizza pie, but was tasty nonetheless. Rating: 7

We were not particularly impressed by this Vegetarian pizza. Rating: Participant Ribbon

Die Pie was a fun room with knowledgable staff, which was important given they boast an exclusively vegan menu. They also make vegan cheese substitutes in-house from both hemp and cashew and were happy to let us sample these while we waited for our food. We enjoyed the Pierogi pizza, which incorporates shredded potato, a faux-cheese sauce, and spring onion, among other things, on a relatively thin crust (also vegan). We felt the crust on this particular pizza was slightly underdone though, and expect it would have been quite a bit stronger if it were given a few extra minutes in the oven. Rating: 6.5

This was the hands-down winner of the day. Despite the bricks of cheese-and-bread weighing us down at this point, we both felt compelled to eat more of this delicious pizza knowing we had two more stops afterwards. We enjoyed the Spinach pizza — which comes on a pan-fried style crust — and would definitely recommend it. Rating: 9

Boss also makes a pretty tasty pie, heavy with cheese and tasteful seasoning (there was a surprisingly amount of spicy kick to the sauce). Loaded heavy with a mozza/cheddar blend, their Tomotorita pizza was definitely a do-over and sit lighter than many of the others described here due to an airier crust. Rating: 7.5

We very much enjoyed this pizza as well — though, ordered a pie without any visible cheese, and feel the need to go back and try something more directly comparable to the rest. Regardless, the crust was relatively thin, dense, and enjoyably chewy. The Choked Cheese pizza focussed on artichoke, zucchini, and roast eggplant, and was served with heaps of arugula; it was a thoughtfully complex flavour combination, and was in no way overly rich despite their use of artichoke dip in addition to the roast artichokes. Would definitely recommend. Rating: 8

I had the pleasure to visit a friend in Seattle who was willing to introduce me to a few pizza places. My favorite was Bar del Corso. This is an amazing little restaurant in Beacon Hill. Some of the best pizza I’ve had in a while. We had a pizza with sausage and pickled goat horn peppers and one with arugula, buffalo mozzarella and prosciutto.  It was a lovely evening with amazing pizza. Rating: 9 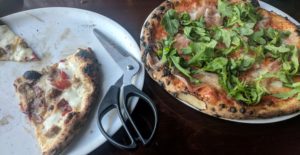 Upon arriving in Boston, we needed food and the concierge sent us to the Salty Pig (a worriesome name if you are eating with someone that is vegan). The pizza turned out to be really great (they also made a great vegan pizza, crust with lots of veggies). The pizza I had, had the obligatory pork products plus a fried egg on the top. I really love the runny egg yoke on a pizza, it’s a great addition. Rating: 8 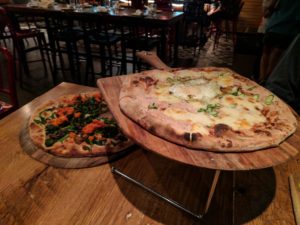 On a recent visit to Nijmegen for the Conversational Speech and Lexical Representation Workshop I went to two pizza places. Both served thin crust pizzas. 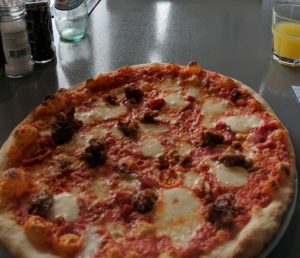 The second place was Romagna. This was a standard Italian restaurant that does amazing pizza. I had two or three different pizzas here and they were all excellent. Alas, I did not take a photo. Rating: 8.5

Of course three pizza places in one afternoon isn’t too many. First we went to Costco (for other reasons) but a slice of pizza is always good. Then we went to downtown Honolulu and visited J.J. Dolans and Proof Public House.

We ordered slices here. We had three good slices of pizza and as a bonus we ordered a desert slice as well. The slices here were pretty standard fair. It’s definitely harder to judge just slices. Rating: 6

We got slices here as well. A cheese slice and and pepperoni. We can’t say this place blew us away but the sauce had a really nice flavor. Rating: 6.5

On our first night in Waikiki for the Acoustical Society of America meeting we went to what we heard was the best pizza on Waikiki. Since Waikiki is a tourist trap we didn’t have super high expectations. We went with a group and had a couple pizzas. We were all pleasantly surprised. We had our standard jalapenos and pineapple and a seafood pizza. This pizza had a really nice crust, with lots of flavor. 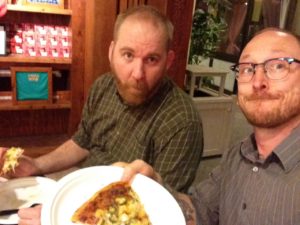 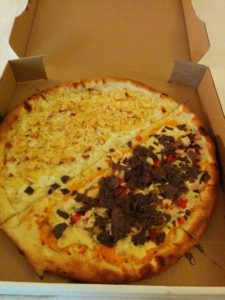 was in Toronto this last week and I tried ZA Pizzeria for dinner. The pizza here was excellent. I had their “Oh, Canada!” and “Nacho ZA” as half pizzas. It was the first time I had chips on top of a pizza. I really enjoyed both pizzas, they were both flavorful and left me wanting lots more. The Nacho ZA was particularly good, I liked the Corn Sofrito, Pico de Gallo, and Jalapeño & Cheddar Cream on this pizza. I’d give this place an easy 8.5